I had the opportunity to do an inexpensive tour in China and take my adult son with me.  It’s one of those things where you get what you pay for.  We went with Rewards Travel China.  It was an 8 day tour.  We arrived in Beijing a day early to have a day before the tour started, to relax and catch up on jet lag.  We stayed at the Macrolink Legend hotel.  A beautiful hotel with large rooms and  a series of hot springs both inside and out.  It was a great way to relax and unwind after a long flight.  The springs were different temperatures and had different healing qualities.  There was even a pool with fish to nibble at your feet.  The Legend is quite a ways from downtown, but we took a cab about 10 minutes to the metro and then the metro into town.  We went to the Beijing zoo.  It was so sad as many of the enclosures were too small for the animals which broke my heart.  At the Lion enclosure, guests were holding up slices of pizza and chicken to try and tempt the cats.  Some folks were throwing popcorn into the area.  I was shocked.  You pay extra to go into the Panda house and they had more space to roam around.

The next day we started our tour and went to the Great Wall, Jade store and the Summer Palace.  It was nice being at a less crowded area of the wall and our bus parked in an area that the vendors couldn’t go to.  You could walk down to the vendors if you wanted, but if you didn’t, you weren’t bothered.   Going to the Jade store, they educate you and then give you time to shop before having lunch there.  After lunch we went to the Summer Palace and saw some of the gardens and the lake.

On the 2nd day of the tour, we went to the Temple of Heaven which was built between 1406-1420. Next we went to the Pearl factory store with tour and shopping and had lunch.  After lunch it was on to Tiananmen Square and the Forbidden City.

3rd day we did an optional trip to the site of the 2008 Olympics.  it was interesting to see the Birds Nest and Water Cube from afar and walk where the athletes were.  We also took a Rickshaw ride on a Hutong Tour.  The Hutong is the old fashion neighborhood with the streets so narrow, you need to get around on a rickshaw.  We also had lunch in a local family home.  Later that day we flew to Shanghai and then drove onto Suzhou.

Suzhou is known as the Oriental Venice.  We went to the Lingering Gardens which were beautiful and then took a canal cruise.  We really enjoyed Suzhou and would go back there.  After the cruise it was off to the Silk Factory and Institute of Embroidery.  After shopping at the Silk factory we had lunch before the Embroidery Institute.  By this time, my son was done with the shopping aspect of the tour.  After everyone was done at the Embroidery place, we headed to Hangzhou and spent the night.

In Hangzhou we first went to a Tea Plantation and sampled some tea and learned about the process.  We then went to West Lake and took a boat ride.  It is a  beautiful park and nature area.  After that we were off to Shanghai.

Our day in Shanghai included going to the Shanghai Museum and seeing artifacts from 6000-5200 BC and older.  It was an amazing museum and hard to imagine the pots or jewelry were from milleniums ago not centuries.  We also walked along the Bund and went to the City God Temple Bazaar  which was fun.  That evening we saw a Chinese Acrobat show.

We had a great time.  The down side of the inexpensive tours is that you go to the Government sponsored shops and all the restaurants taste the same.  I would have like to try the Hot Pots, and other cuisine, but the tours go to the Government approved restaurants and it all tends to be the same. It’s like going to a local Chinese restaurant and having sweet and sour pork,  beef and broccoli and chicken fried rice.  The Government supplements the cost of the tour and they hope to recoup some of that via purchases at the shops.  When you spend a little more for your tour to China, you get more.  The hotels were very good and one thing to note, they are big on having a window from the bathroom into the bedroom area.  It was fine in most of the hotels as they had blinds, but in the last hotel they didn’t and it was awkward being with my son.  We had to have the lights on in the bedroom and not in the shower to have some privacy.

We only ran into lower air quality on the day in Shanghai.  The day we were leaving, we were stuck on the tarmac for 4 hours waiting for the air to clear so we could take off.  It was the first time I was served lunch onboard while parked at the gate.  We flew nonstop on Hainan Airlines from San Jose to Beijing.

Overall we enjoyed our trip and with our Visa’s good for 10 years plan to go back and see some of the other areas including Xi’an,

On the Bund in Shanghai. 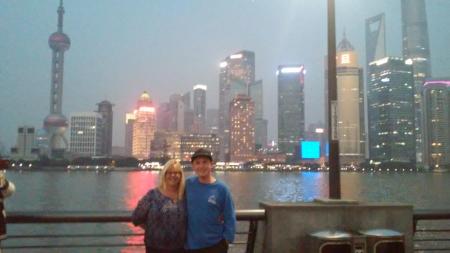